Nuns joyfully await their turn to receive their bhikshuni vows.

The first ceremony to fully ordain women within Tibetan Buddhism in modern times concluded Thursday, June 23, 2022 in Bhutan. At the request of the King of Bhutan, His Holiness the Je Khenpo, the spiritual head of Bhutan’s largest Buddhist school, the Drugpa Kagyu, presided over a ceremony to grant bhikshuni vows to 144 women.

This initiative marks a major step toward addressing the inequality between men and women in Tibetan Buddhist monasticism. Until Thursday, women were only granted novice ordination, while men could receive full ordination, guaranteeing that women could never assume full roles within the monastic order.

This historic event establishes a bhikshuni sangha — an order of fully ordained women — within Tibetan Buddhism for the first time. Until now, senior leaders within Tibetan Buddhism such as His Holiness the Dalai Lama and the Karmapa have spoken publicly in favor of granting full ordination to women, but have stopped short of organizing a bhikshuni ordination for women in their communities. 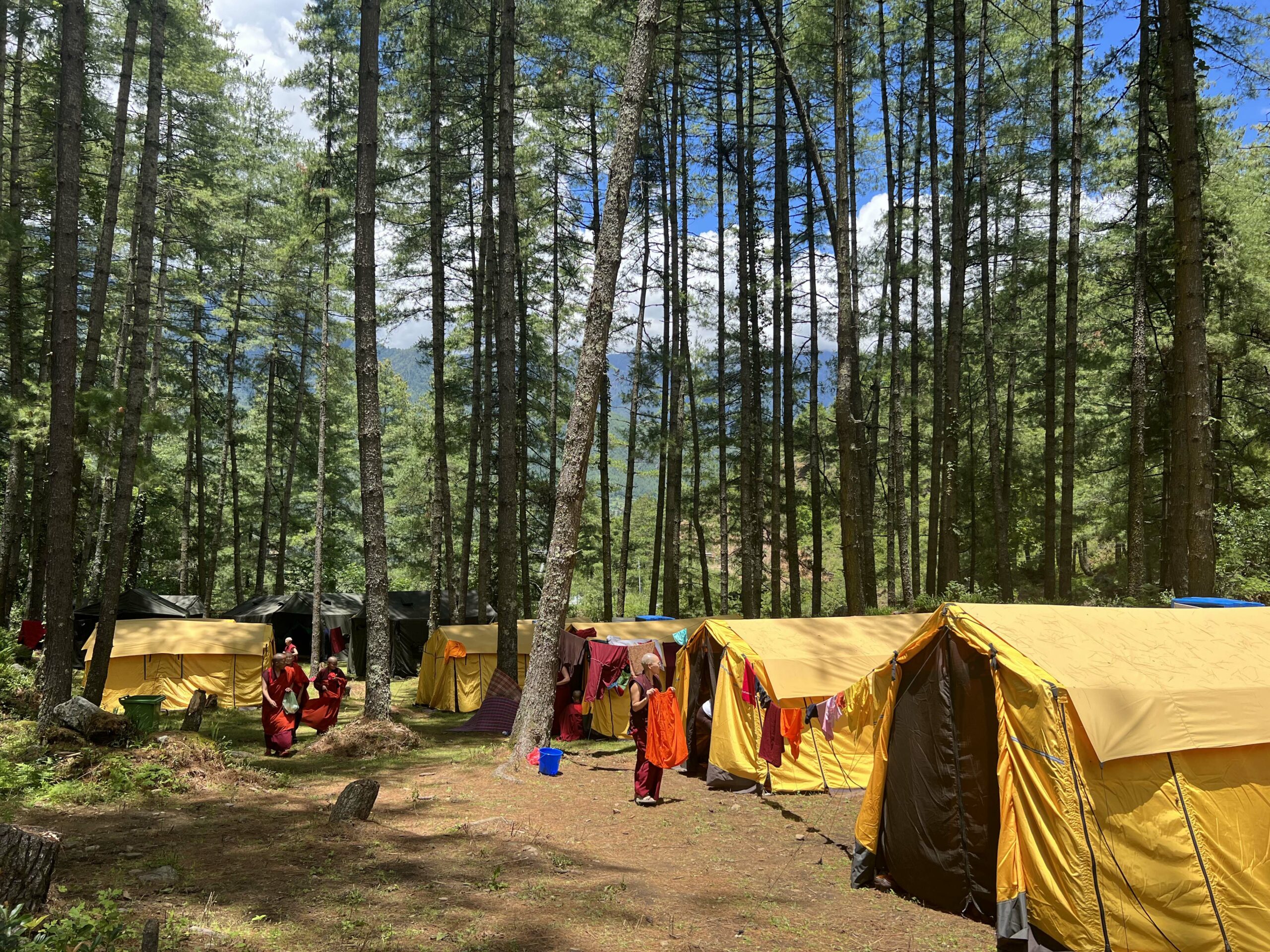 A tent encampment was erected near the ordination sites to house the nuns.

In a lengthy statement describing the decision to offer full ordination, Je Khenpo described the event as aimed at “serving sentient beings through the buddhadharma, engendering religious freedom and helping human rights.” He added, ”…whenever I look at images of Buddha Shakyamuni these days, every one of them appears to be radiantly smiling at me, which I think is an early indication that what I am doing is not wrong. I have a strong conviction that they would announce, ‘this is excellent!’ and never say ‘this is not right.’”

Bhutanese Buddhists practice Tibetan Buddhism, but the ecclesiastical hierarchy of their monastic communities is distinct from that of the Tibetans in exile for whom the Dalai Lama is a supreme authority on religious and political matters. The move has garnered a wide base of support at the highest levels of Bhutanese lay society and its monastic hierarchy. 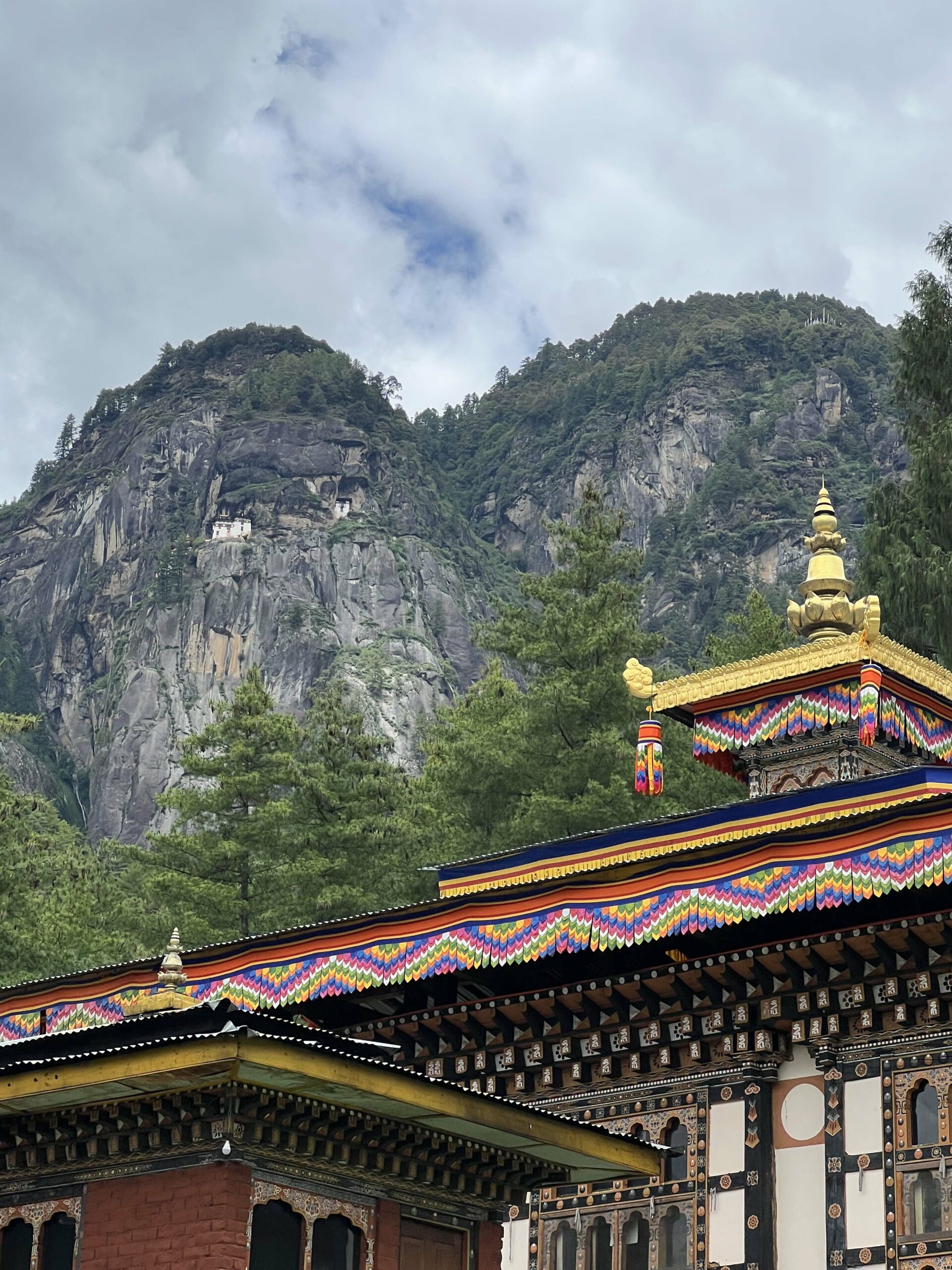 The ordination took place within view of Taktsang, one of Bhutan’s most important pilgrimage sites.

Such a public expression of support from the highest levels of Bhutanese lay society as well as the highest level of monastic support bodes well for this bhikshuni sangha to receive the social support that will permit them to flourish. Although the Buddha himself granted full ordination to women and an order of fully ordained women flourished for many centuries in India, that opportunity has not been made available to women within Tibetan Buddhism in modern times.

The ordination was held at a specially prepared site below Taktsang, one of Bhutan’s famous sacred pilgrimage spots. Witnesses report seeing rainbows encircling the sun during the ceremony, which began on the summer solstice.

Utmost care is being taken to conduct the ritual meticulously. According to the monastic code, women must be ordained in groups of three. Given the large number of candidates to receive full ordination, three days was required to complete the ritual requirements for all 144 new bhikshunis. The nuns had received preparatory teachings from Je Khenpo prior to the ordination, and plans are already underway to train the nuns in their new role as holders of bhikshuni vows and to uphold their new role as fully ordained nuns.

Most candidates were from nunneries across Bhutan, with some women joining from nunneries in neighboring countries and one English nun residing in Bhutan. Jetsunma Tenzin Palmo, a long-term advocate of full ordination for women, was also present in Bhutan for the ordination. Jetsunma is a founding member of the Committee for Bhikshuni Ordination, former president of Sakyadhita and founder of the Dongyu Gatsal Ling (DGL) nunnery, also in the Drukpa Kagyu school. Nuns from DGL are among those receiving their bhikshuni vows at this ceremony.

Speaking of the 4th King of Bhutan, Jetsunma said, “His Majesty was very outspoken on the importance of raising the status of nuns to be equal to the monks.” 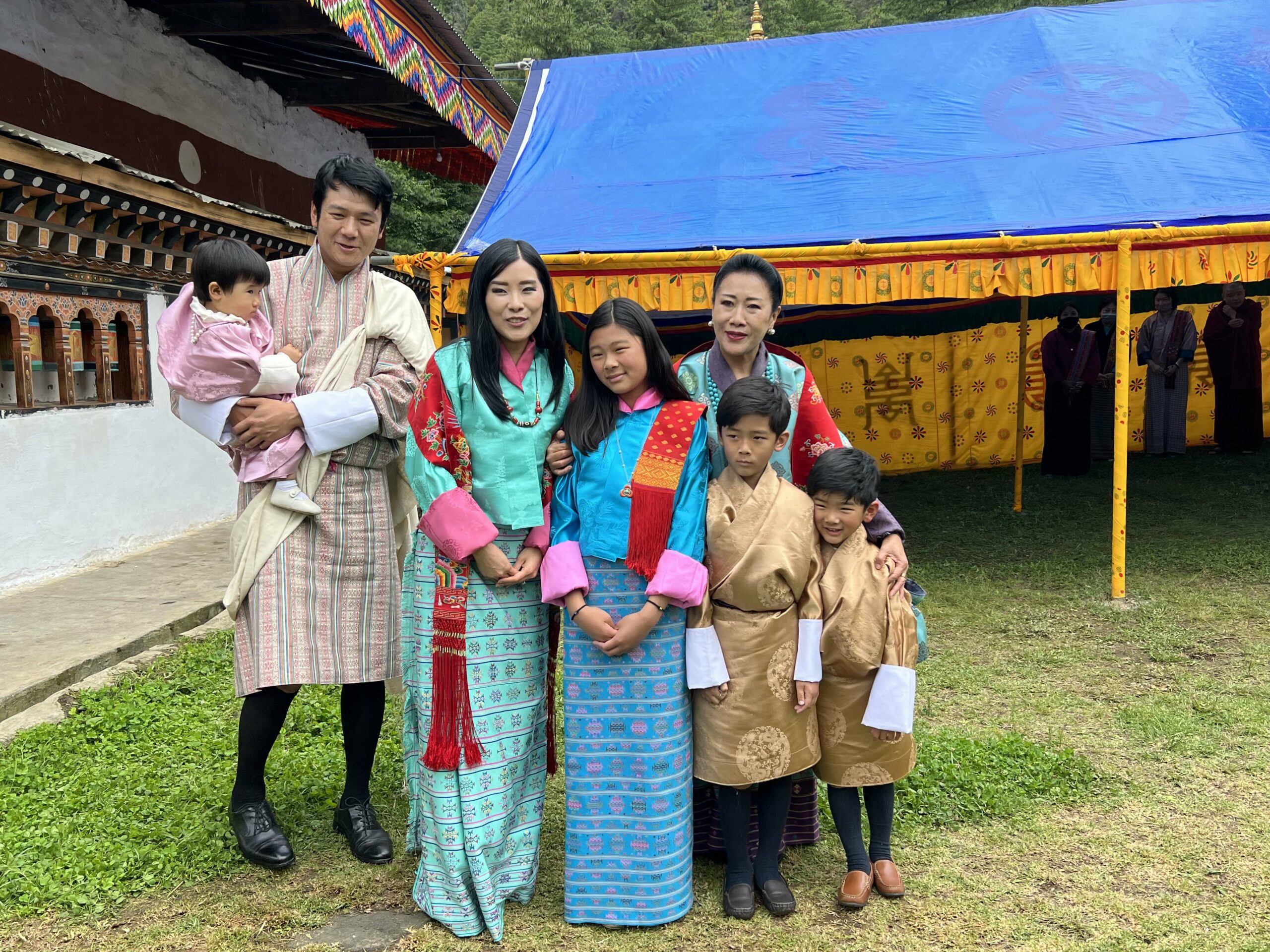 Bhutanese royalty traveled to visit the ordination site (Her Majesty the Queen Mother Ashi Tsering Yangdon Wangchuck, at back to the right, was a key supporter of full ordination for women; the nuns call her “Dharma Queen”. The “Dharma Queen” is founding patron of the Bhutanese Nuns’ Foundation which organized the event and is pictured here with her daughter (sister of the present king) and son-in-law, and their four children. They had accompanied the former 4th King, His Majesty Jigme Singye Wangchuck.

Interviewed by Dr. Tashi Zangmo, head of the Bhutanese Nuns’ Foundation, one nun commented that she no longer had to pray to be reborn as a monk, since now with this ordination everything was fulfilled for attaining enlightenment in female form.

In 2007, at a conference at the University of Hamburg that had been convened at his request, the Dalai Lama was presented with two valid options for conferring full ordination on women according to the Mulasarvastivada Vinaya monastic code followed by all Tibetan Buddhists. Vinaya scholars who had gathered of the conference concurred that women could be validly granted bhikshuni vows in a ceremony with only fully ordained monks from the Tibetan Buddhism monastic order, or the vows could be conferred by a dual gathering of Tibetan monks and fully ordained nuns from the separate Dharmagupta orders of Chinese, Korean and Vietnamese orders. However, at the close of the conference, in a private audience with conference organizers, the Dalai Lama explained that he did not feel he could proceed at that time due to the force of the opposition to women’s full ordination by the male monastics in his Tibetan order. 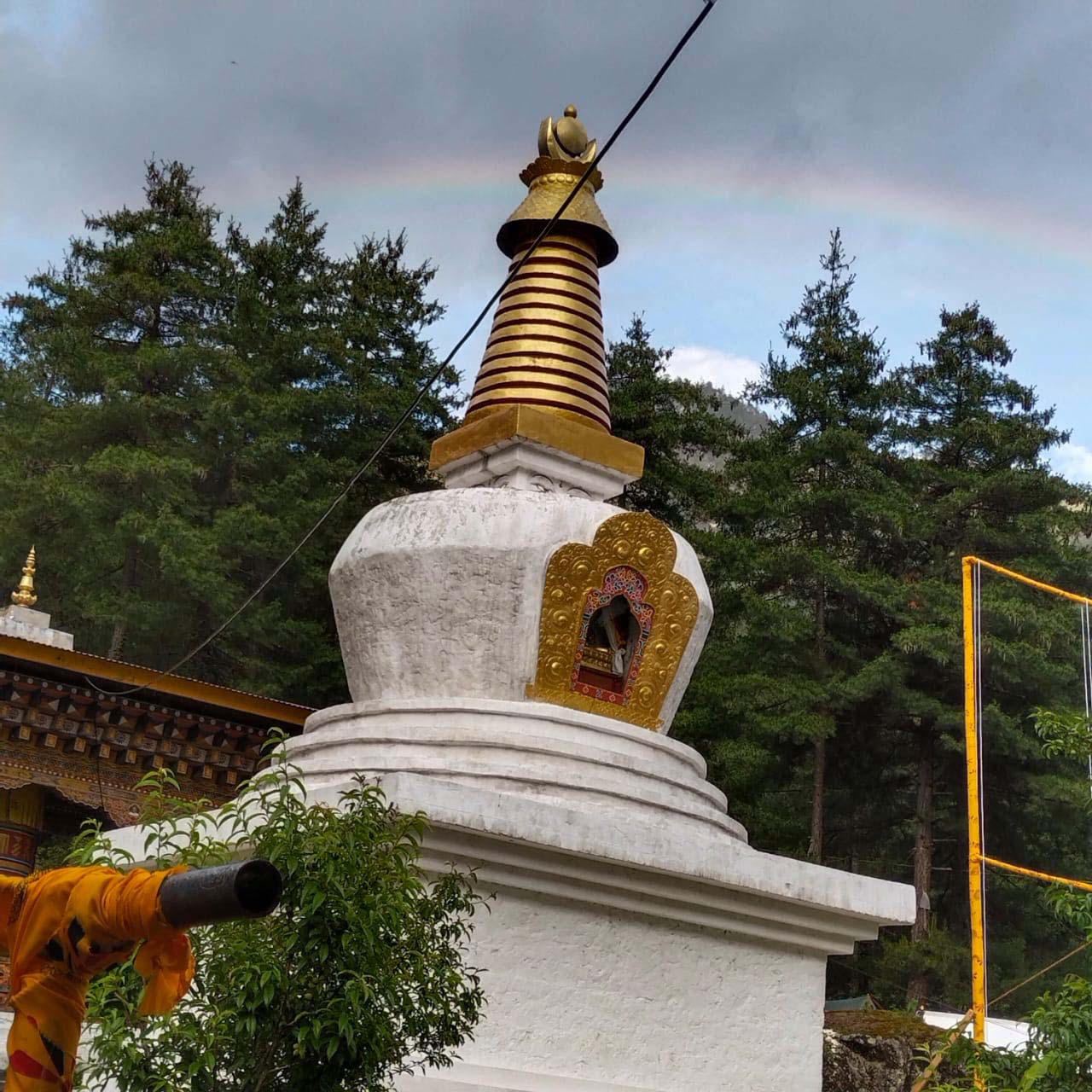 Rainbows were viewed by attendees encircling the sun and signaling to all the auspiciousness of the occasion.

The ordination ceremony held in Bhutan has followed the first of the two valid options for granting bhikshuni vows on women according to the Mulasarvastivada monastic code followed by Tibetan Buddhists: ordination by the male monastic sangha alone. After the women fully ordained have held their vows for twelve years, they will become eligible to join male monastics in conferring together the bhikshuni vows on future generations of women.

This historic news was announced Thursday by the Central Monastic Body of Bhutan. The ordination event itself was organized by the Bhutanese Nuns’ Foundation.

We will be happy to hear your thoughts

This website uses cookies to improve your experience while you navigate through the website. Out of these, the cookies that are categorized as necessary are stored on your browser as they are essential for the working of basic functionalities of the website. We also use third-party cookies that help us analyze and understand how you use this website. These cookies will be stored in your browser only with your consent. You also have the option to opt-out of these cookies. But opting out of some of these cookies may affect your browsing experience.
Necessary Always Enabled
Necessary cookies are absolutely essential for the website to function properly. These cookies ensure basic functionalities and security features of the website, anonymously.
Functional
Functional cookies help to perform certain functionalities like sharing the content of the website on social media platforms, collect feedbacks, and other third-party features.
Performance
Performance cookies are used to understand and analyze the key performance indexes of the website which helps in delivering a better user experience for the visitors.
Analytics
Analytical cookies are used to understand how visitors interact with the website. These cookies help provide information on metrics the number of visitors, bounce rate, traffic source, etc.
Advertisement
Advertisement cookies are used to provide visitors with relevant ads and marketing campaigns. These cookies track visitors across websites and collect information to provide customized ads.
Others
Other uncategorized cookies are those that are being analyzed and have not been classified into a category as yet.
SAVE & ACCEPT